If you have a Nissan and it gets a P0500 code, it is an OBDII error for the “Vehicle Speed Sensor Circuit“.

This is usually a bad speed sensor or wiring but can sometimes be other components.

A P500 OBDII code on a Nissan happens when the ECM can not read the speed sensor output.

Many Nissan vehicles will have two types of speed sensors.

The VSS output sensor is what the speedometer uses to display the MPH to the driver.

The automatic transmission uses the Input sensor for shifting and other controls.

The VSS sensor creates its own voltage; as the voltage increases, it sends a signal to the instrument cluster under the dashboard.

The cluster and speedometer translate this into the speed the vehicle is traveling, and the information is sent to the ECM.

When replacing the transmission speed sensor for the speedometer, be sure it is the VSS output sensor.

The following OBDII information is related to a P0500 OBDII Code.

Code Set Condition: When the ECM detects no signal from the vehicle speed sensor (VSS) or the VSS circuit is open or shorted. 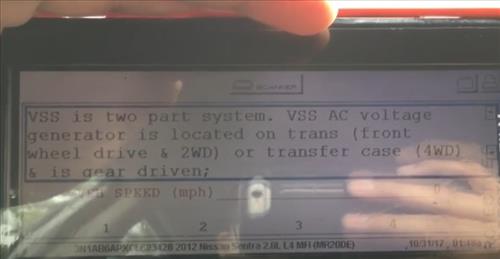 How To Diagnose a P0500 OBDII Code

Using an OBDII scan tool that can read SRS transmission faults, the code P0500 will be pulled from the ECM.

Once the code is known, individual components, including the VSS Output Speed Sensor and wiring harness, will need to be checked or replaced.

The usual fix is to replace the VSS Output Speed Sensor.

Look online for the VSS Output Speed Sensor on your vehicle year and model.

Check the wiring and wiring harness going to the VSS sensor.

The VSS sensor is a common problem, but other things can also cause the issue and be model-specific.

For example, some Nissan Sentra’s can get the code when a wheel sensor goes bad or has different-sized tires on the front and back.

While rare, keep in mind other causes can happen, and not all Nissan models are the same.

Usually, the vehicle is drive-able, but the speedometer does not work along with the dashboard lights on.

In some cases, depending on the car or truck model, the onboard computer can set it into limp mode.

If the vehicle is going into limp mode, it will need to be repaired before further driving is done.

Summary
If you are getting a P0500 code on a Nissan, it is an error with the speedometer.

This is usually the VSS output sensor but can be caused by other issues depending on the vehicle model and year.

For example, newer Nissan’s have more electronics, and sometimes the error can be caused by a wheel sensor.

One vehicle I worked on recently got the error since different sized tires were on the front and the back.

After replacing the VSS sensor, wiring harness, and all four-wheel sensors, the code kept coming back.

While using an OBDII scan tool, real-time data on the wheel sensors, it was seen that the back tires were 10 percent off from the front.

After looking more closely at the tires, they were found to be differently sized on the back, which was causing the issue.

This type of problem with the tires is rare, but just keep in mind other things can cause the sensors and ECM to get bad data.

The tires would not have caused an issue with an older Nissan.

Have you had an issue with a P0500 OBDII Code on a Nissan? Let us know your thoughts below.