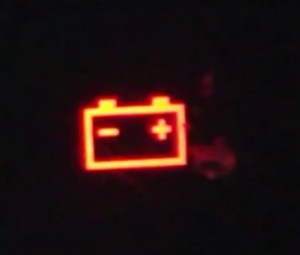 If the battery light has come on in your second generation Dodge Neon (1999-2005) a few things need to be checked to find the problem.

This is not meant to give a detailed guide but a basic overview of what needs to be checked.

The first thing that should be checked is the alternator. If you have a multi meter it can be checked by placing the leads on the terminal and finding the voltage when the car is running and when it is off.

When the car is off the voltage should be at 12-13 volts.

With it running it should be between 14-16 volts.

The voltage will vary between those numbers depending on the shape the battery is in and what else is on in the car, such as the radio, air conditioning, and so on.

If the voltage doesn’t go up above 14 volts when the is running the Neon is not charging correctly.

This usually mans a bad alternator but could also be a bad connection or computer voltage regulator problem.

An alternator can be taken out of the Neon and taken to a auto parts store such as AutoZone which will test it for free and see if it is bad or good.


With the car Off and using a multi meter the battery should read at least 12 volts. If it is lower than 12 volts it may still be good but simply hasn’t been charged.

A battery charger can be used to charge the battery. If it holds a charge than it is good if it doesn’t hold a charge it needs to be replaced.

There are not a lot of wires going to an alternator.

Checking the wires for any cuts, breaks, or bad connections should be done.

There also fusible link located near the starter that can possibly burn out.

All wiring connections can be tested with a meter set to read continuity.

The voltage regulator on second gen Dodge Neon’s is built into the cars computer (PCM).

When a voltage regulator fails it will case the voltage to vary wildly which it should not do.

If this is found to be the problem than it can cause other problems since the voltage can go high above normal. The fusible link may blow if the voltage goes to high and would also need to be replaced.

Second generation Dodge Neon’s have a battery temperature sensor that is located on the shroud that sits around the battery.

If is fails it will case the battery light on the dashboard to come on.

They are easily replaced if faulty.

Be sure to test everything else before replacing the temperature sensor.

Also a battery temperature sensor is a dealer only option so most parts stores will not carry them.

Luckily they can be bought online on Amazon or eBay

Best Way to Remove a Wheel Stud: Tips And Tricks

Step-By-Step How to Repair a Windshield Chip or Crack