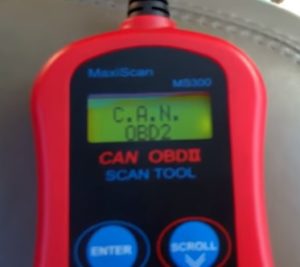 An OBDII scan tool can read and erase engine error codes from a vehicles computer that the engine has given.

This is often displayed to a driver with the dashboard engine light.

Cars and trucks today all have a computer (ECM, PCM) that controls the vehicles engine and will get an error when there is a malfunction.

The error is usually displayed to the driver with a check engine light that will come on.

While the check engine light warns that there is a problem it cannot give any details to what the problem is.

To get details on the problem car and truck manufactures have installed a port that can talk to the cars computer and display the problem.

This port is called a OBD2 port and is usually located under the dashboard.

To read the error codes a tool called a OBD2 scanner tool is needed to read the codes and display them to the user.

OBD II ports are a 16 pin connector that is the same on all cars and trucks since 1996.

The OBD port is almost always located under the dashboard in the driver side if a vehicle. 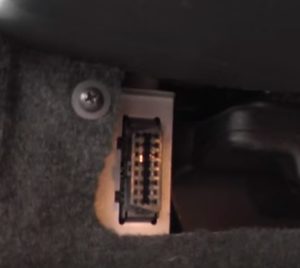 How to Use a OBD II Diagnostic Tool.
Each scan unit can be slightly different in operation such as the buttons pressed and menu system.

Most will follow the following procedures
1…A scanner tool will need to be bought. There are many types from small and cheap to expensive high end units.

2…The scanner is plugged into a vehicles OBD II port and the key set to the ON position.

3…After pressing a button to scan for codes, a code (or codes) number will be displayed if there is a problem.

4…The number can then be looked up in a book or online to pinpoint the error code meaning.

5…There usually is a option to Clear the Codes which is not a good idea unless they are written down. If a code is erased and the problem not fixed it will come back on.

Understanding OBD2 Codes
Most all code numbers are the same across all cars and trucks so a P0197 Code (Engine Oil Temperature Sensor Low) will have the same meaning on a Ford, Dodge Chevy Toyota and so on.

Manufactures can enhanced the codes a vehicle can give but the basic codes are universal across all vehicles.

After reading a code number it can be looked up in booklets that usually come with a OBD2 tool or can be simply looked up online.

Keep in mind that codes can only point to the problem, so while many jump to the conclusion that a component is bad and replace it another part may be causing the problem.

Also when many codes are given often it is a single problem that is causing a cascade of failures to happen.

Testing the components that can cause the error should be done before new parts are swapped out.

During this time there was no set standards and each manufacture built their own proprietary protocols.

If you need to fix a 1990-1996 vehicle and want to use the OBD port for diagnostics the tool for that model of car or truck would need to be acquired.