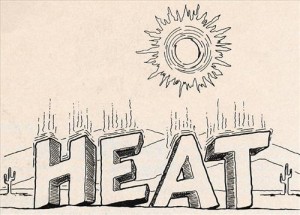 WHAT IS HEAT? To understand how an air conditioning system works, we must first understand something about the nature of heat.

Webster Defines Heat: Added energy that causes substances to rise in temperature, fuse, evaporate, expand or undergo any of various other related changes, that flows to a body by contact with or radiation from bodies at higher temperatures.

Now that may seem a bit difficult to understand at first, but the principles of rising temperatures, evaporation, expansion and radiation will all become clear as we continue through this chapter. For a simpler definition, we might just say that heat is energy. The meshing of gears and the turning of wheels causes friction, which results in heat. Combustion (fire) gives off heat. The burning of the sun radiates heat to the earth Heat in the correct amount will provide life and comfort. Heat in either extreme – either too much or too little – brings about discomfort. The control of heat means the control of comfort. Air conditioning is a method for controlling heat.

WHEN IS HEAT HOT? All substances contain heat. Something “feels” hot when it is substantially WHEN IS HEAT COLD? warmer than our own body temperature. When something contains much less heat than our bodies, we say it feels cold. Cold is merely the removal of some heat. Scientists tell us that a measurement called “Absolute Zero” is the point at which all heat is removed from an object. This point is determined to be 459°F below zero (-459°F). Any substance above this absolute zero temperature retains some heat. 2

All Substances Contain Heat.The average person has a comfort zone of about 70-80°F. In this temperature range, we feel most comfortable. All objects within this temperature range are comfortable to the touch. As the temperature of anything goes above or below this range, we think of it as hot or cold. HEAT MEASUREMENT The temperature or “intensity” of heat is measured with a thermometer. While both Celsius (°C) and Fahrenheit (°F) are sometimes used, the majority of references in this manual will be to Fahrenheit. 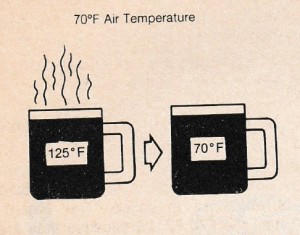 EVAPORATION, CONDENSATION AND FREEZING (CHANGE OF STATE)
Heat Moves From a Warm Object to a Cooler One The reverse is true if you are in a place that is warmer than your body temperature. You feel warm because heat from the warmer air is moving into your body. Due to body temperature controls, your actual body temperature will never reach that of the surrounding air in either of these cases. Now that we have seen a little about the flow of heat (hot to cold), let’s look at another aspect of heat and the effect of heat on other objects – change of state. This term is very important to air conditioning because refrigerant changes state within the air conditioning system constantly while the system is in operation. There are 3 processes that describe a change of state: Evaporation, Condensation and Freezing. Evaporation is the term used when enough heat is added to a liquid substance to change it into a vapor (gas). You are familiar with boiling water and the vapor (steam) that is given off. At the boiling point of water (212°F), enough heat is absorbed by the water to change its state. The liquid becomes a vapor. This is called evaporation. Condensation is the term used to describe the opposite of the evaporation process. If you take a vapor and remove enough heat from it, a change of state occurs. The vapor becomes a liquid. The change of vapor to a liquid is called condensation.

Freezing is another change of state. Freezing results when heat is removed from a liquid substance until it becomes a solid. Remember that anything above -459°F contains some heat. In an air conditioner, freezing must be avoided.

HEAT MOVEMENT DURING The greatest quantity of heat movement occurs during a change of state. CHANGE OF STATE BTU’s are absorbed during evaporation, and they are given off during condensation. This quantity (remember that BTU’s are a measure of heat quantity) is called “Latent Heat” and cannot be read on a thermometer.

LATENT HEAT OF Evaporation
When heat is added to a container holding one pound of water at 212°F (at EVAPORATION sea level), the water will absorb 970 BTU’s of latent heat without any change in the thermometer reading; however, a change of state from liquid to vapor will occur. The heat that is absorbed is called “The Latent Heat of Evaporation.” The vapor will retain the 970 BTU’s because they are required to maintain the change of state.

Illustrating the Latent Heat of Evaporation LATENT HEAT OF When heat is removed from one pound of water vapor at 212°F (at sea level), CONDENSATION the vapor will give off 970 BTU’s without causing a drop in the thermometer reading. However, a change of state from vapor to liquid will occur. This heat that is given off is called “The Latent Heat of Condensation.”

HOW DOES HEAT GET INSIDE A VEHICLE?

METHODS OF MOVING HEAT IN AND OUT OF THE VEHICLE
When a vehicle is driven or parked in the sun, heat enters the vehicle from many sources. Sunlight hits the roof, body panels and glass, then radiates to the interior. Heat is radiated from the hot pavement and from the occupants. Engine heat travels through the firewall. Exhaust system heat generated by the exhaust pipes, muffler and catalytic converter, enters through the floorboard. All of these and other miscellaneous heat sources increase the air temperature within the car. On a warm day (approximately 85°F), the interior temperature of a vehicle left standing in the sun with the windows closed can reach 140°F. 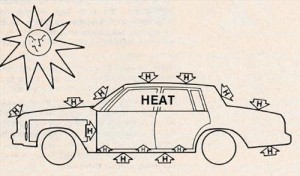 Sources Which Create Heat Within the Vehicle

Radiation Heat radiates from hot substances, and increases the temperature of surrounding cooler ones. The sun is a major source of heat for the earth. Its energy, transmitted through space, heats the earth. Direct sunlight is a prime example of heat by “Radiation”.

Color also plays an important part in heat radiation. A dark colored vehicle may feel hotter than a light colored vehicle. This is because lighter colors tend to reflect more heat, while darker colors are more absorbent. Likewise, smooth surfaces will reflect more heat than rough surfaces. For an example of radiation type heat in an A/C system, the condenser, which contains high

Conduction To remove the heat from the vehicle’s interior, the air conditioning system must absorb the heat and carry it out of the interior and release it into the atmosphere. Heat is absorbed into cooler substances by “Conduction”. We have all experienced this by lifting a hot pan from the stove. The handle is hot even though it is not in direct contact with the burner.

The heat is conducted through the metal of the pan to the cooler handle. Remember, heat moves from a warmer object to a cooler one. Similarly, a metal bar heated at one end will become hot at the other by conduction. In the air conditioning system, hot air from inside the car is blown through the metal fins of the evaporator. As the heat comes in contact with the cool evaporator coils, it is absorbed, by conduction, into the cooler R-12 circulating through the evaporator coils. Then, the heat absorbed into the R-12 circulates out to the condenser and is radiated to the cooler atmosphere.

Convection When we turn on a hot water faucet, we get hot water, although the water heater is some distance away. This is because the moving water carries the heat from the water heater to the faucet. In an air conditioner, the heat which was conducted into the refrigerant at the evaporator is carried through the system by the moving R-12 (convection). It is being moved by the pumping action of the compressor. This flow of refrigerant carries the heat from the evaporator to the condenser, where it is given off to the atmosphere. Heat is also carried from the condenser by ram airflow. This type of heat movement is also called convection.

Summary of Heat Movement
The heat inside the vehicle is blown across the evaporator coils (convection). The heat is absorbed into the cool R-134 inside the coils (conduction). The R-134 circulates the heat to the condenser (convection). The heat is absorbed into the cooler condenser fins (conduction). Next, it is given off to the cooler atmosphere (radiation). Airflow then carries it away (convection). Air temperature is only one factor affecting body comfort. Others include air movement and humidity. Movement of air provides for body comfort due to removal of the following: (1) nearby moisture, lost by the body during the evaporation process; (2) heat surrounding the body, lost by the convection process; and (3) heat of surrounding items, generated by the radiation process. That’s why an electric fan, or even a hand held fan, provides comfort on a warm day. Humidity is moisture in the air. Relative humidity is the percentage of moisture in the air in relationship to what that air is capable of holding at a given temperature. Low relative humidity means the air is relatively dry, capable of absorbing moisture. When humidity is relatively high, evaporation processes are slowed. Removal of heat by evaporation decreases. Just as our temperature comfort range is 70-80°F, likewise, our humidity comfort range is 45-50% relative humidity. Therefore, to be effective on hot, humid days, an automotive air conditioner must remove both heat and moisture from the vehicle, and provide some degree of air movement.