So I finally got the brackets on the 360 and everything fit.

Next I started on the Headers by trying to fit the ones that came out of the truck.

I knew they likely wouldn’t work (they didn’t) but I had to try.

I stated looking on eBay for some headers which were pricey at around $400-$1000.

Next I tried Craigslist and found a set of headers that came off a 1970 Dodge Duster.

The Charger is a B-body and the Duster A-Body so I was unsure if they would fit.

The Craigslist seller had a no-return policy but they did look like pictures of 68 Dodge Headers on eBay.

After a short debate I decided to get them and got the seller down from $100 to $75.

Luckily they worked after a lot of effort I got them in. 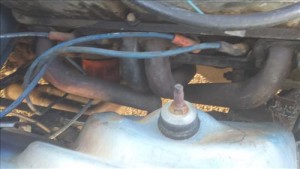 One of the biggest hurdles was (for these style of Headers) I had to remove the steering bar on the driver side so it could slide through the middle of the Header. 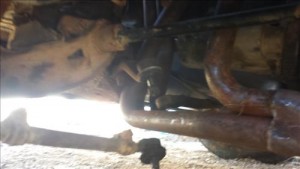 I also had to jack the engine up, push it over to one side as far as I could, and than fight to get them in. Mainly the driver side.

If I had to do it over I would definitely drop the headers in and tie them to the side before dropping the engine in.

The next thing I looked at was the transmission linkage which looks like it got bent. Will be starting on it next.