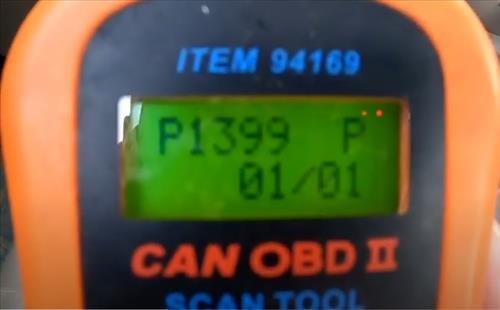 If you own a Honda and get an OBDII code P1399, it is a notorious error for “Random Cylinder Misfire Detected.”

It is an OBDII code specific to Honda vehicles including the Accord, CRV, Odyssey, Civic, and more.

The most common fix is a bad injector or spark plug wire, but it can also be caused by other things.

What Is a Honda P1399 OBDII Code?
A P1399 is a Honda OBDII error for “Random Cylinder Misfire Detected.”

When a spark plug is not firing correctly in a cylinder, the onboard computer (ECM) will give the error.

Several components can cause a cylinder to misfire, but it is within the spark and fuel components.

For example, a bad spark plug wire can cause no spark or intermittent spark to a cylinder and cause a misfire.

Likewise, a bad fuel injector can cause a fuel delivery issue that causes the same symptoms.

How To Diagnose a P1399 OBDII Code

The find the source of the misfire, testing both the electrical (spark) and fuel will be necessary.

The first step is to narrow down which cylinder is having the problem.

If you have a good OBDII scan tool, the job will be easier, but if not, there are a few backyard mechanic tricks to help.

First, narrow down which cylinder is having the problem by pulling the injector wires or spark plug wires one at a time.

For example, with the car running, the power on an injector can be removed on each cylinder to see if there is a change in idle.

If there is a change in the idle, that cylinder is most likely good.

If there is No change in the idle, that cylinder is likely the one with the problem.

Likewise, a spark plug can be pulled on each cylinder to see if the idle changes.

Once the bad cylinder is found, more components can be tested on that cylinder.

For example, the spark plug wires on the cylinder can be swapped out along with the injector to see if the problem clears.

Once the cylinder is found that is causing the misfire, parts can be swapped around until the bad part is also found.

Some mechanics will swap in all new injectors and wires on the cylinder, causing the problem.

One part at a time can also be bought to see if the problem clears.

Keep in mind while the problem is usually an injector or spark plug wire, it can be caused by other things.

It will depend on how bad the misfire is if the car or truck is drive-able.

If the cylinder is only occasionally intermittently misfiring, the vehicle may be drive-able.

If the misfire is constant, the vehicle will likely run too rough to be drive-able.

How Serious is the P1399 OBDII Code in a Honda?

A P1399 OBDII Code can be a serious issue since the vehicle will not run correctly.

This could potentially leave a driver stranded and broken down.

It will depend on how bad the misfire is and whether it is intermittent or constant.

Is a Honda P1399 OBDII Code Expensive to Fix?

Usually, a P1399 OBDII Code is not too expensive to fix with a new injector and spark plug wires, often the most common bad parts.

Troubleshooting the cause of the problem and the bad part is usually the most problematic.

If you find the bad part yourself, it will not cost too much, but a professional shop will charge to find the cause, which can often be the highest cost.

Summary
A Honda with a P1399 OBDII Code has a cylinder that is misfiring.

This can be caused by several things but will be spark or fuel, which can be narrowed down.

The first step is to narrow down which cylinder is causing the problem.

Once the cylinder with the misfire is known, finding the bad component causing the issue will be easier.

Usually, new parts are swapped on the cylinder until the problem clears.

Have you had an issue with a Honda and a P1399 OBDII Code? Let us know your fix or problem below.

One thought on “What is a Honda P1399 OBDII Engine Code?”