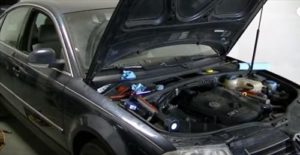 There are other things that can cause it such as a bad connection but the CTS or thermostat are the most common suspects.

Both are cheap so cost is not a big factor if you a DIYer like me.

In my case the engine never overheated and like always it went to 190 degrees Fahrenheit and basically stayed there.

If the thermostat was bad than it would be overheating, but since it wasn’t it pointed to the Coolant Temp Sensor as the likley culprit. 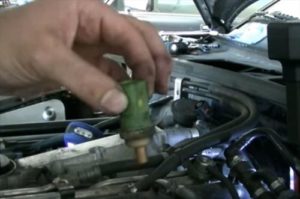 I went ahead and ordered both since they are cheap but focused on replacing the CTS.

I drove it for another week all the while watching the temperature without any issues except possibly worse gas mileage.

Replacing the CTS is straight forward with a clip that needs to be removed which allows it to pop out.

It is located directly behind the engine, which unfortunately leaves a lot of hoses in the way and the firewall which makes it tough to get to.

Here is its location if everything wasn’t in the way (Its the green thing). 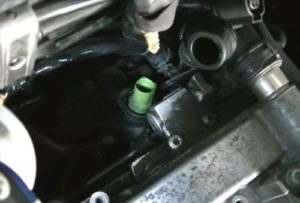 It can be removed and replaced without removing anything else but unless you have small hands it can be a pain.

Here is the CTS location with all the hoses in the way. 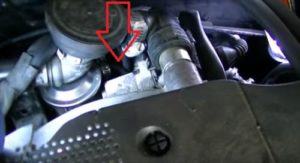 The small clip that holds it in place is pointed toward the front of the car, at least in my case, and it simply need to be popped out for the CTS to come out. 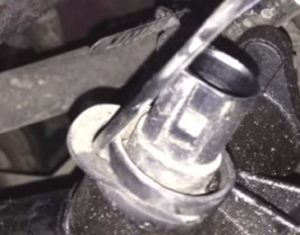 A screwdriver pops the clip out.

A rubber gasket is used to seal everything up and was included with the CTS I ordered.

Final Thoughts
I did get it out and replaced without removing any other parts but it was a real pain.

This was the problem with the engine and the P0117 went away after I replaced it.

Replacing the CTS in a Volkswagen Passat, Jetta, Audi, 1.8L engine is not difficult in terms of complexity but in its location.

If it were on the side of the engine it would take less than 2-3 minutes to pop out the old one and a new one in.

Of course, this is my experience with other more experienced individuals possibly having a trick to get it out easier.