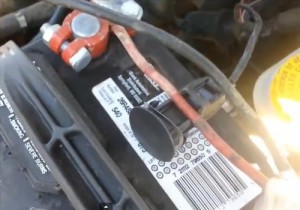 I recently ran into a problem with a 2003 Dodge Neon that the battery light would not go off.

After checking the usual suspects such as alternator, battery, and so on I found out that second generation (2000-2005) Dodge Neon’s use a Battery Temperature Sensor.

The battery temperature sensor is there to charge the battery correctly depending how hot or cold it is.

If the sensor goes bad or has a bad connection the light will come on inside the Neon until it is fixed.

Be sure to check all possible other causes such as the alternator or battery. But once all other things have been ruled out than check the temperature sensor as I have now run into this problem and it is an easy fix once known.

Another problem I ran into was my local parts stores could not find the battery temperature sensor listed, even though I found it online.

Here it is listed on Amazon
Mopar Battery Temperature Sensor 56041053

This has more to do with the knowledge the counter person has than anything else so may not be a concern. But for me they argued and said that part didn’t exist.

If you do run into this problem simply order one from Amazon as they are cheap and can be done easily.